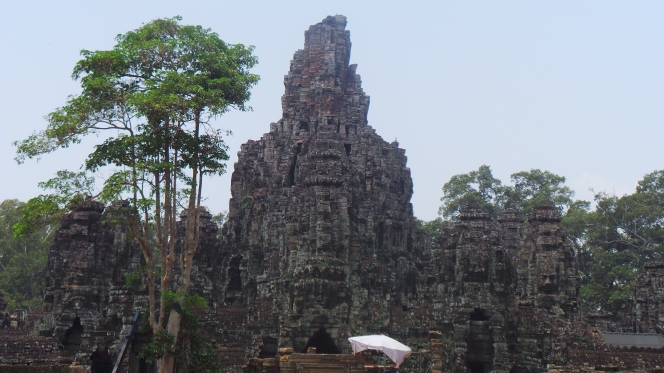 We are in Siem Reap, Cambodia, drinking in the beauty of a thousand years.  As we ride on the tuk-tuk from one ancient temple to another, a feeling of timelessness grips me.

The volcanic rocks that the temples are built from, stand proud and tall, one above the other, rising into the skies, majestic and filled with exquisite detailing and engraving.  The Sun beats down on us mercilessly.  The same Sun that beat down on the stone carvers a thousand years ago.

Some of these temples are being renovated. Some others are partly disintegrated, with huge slabs fallen in sudden piles, now here, now there, as we stroll across, taking in the legends and stories that are showcased on the walls; and imagining our own stories about the craftsmen and their craft.

We take a breather after the long walk around Angkor Wat.  We sit close to a long wall.  The grandeur of the temple has to be seen to be believed.  I cannot put down in words the various emotions that surge through me.  As we stretch our legs and fan ourselves with our caps, tour-guides come in with groups of tourists from around the world.

The wall behind us has elaborate carvings from one of India’s greatest epics – The Mahabharatha.  Earlier in the day, when our guide showed us these panels, we were awestruck!  Awestruck by the fact that the stories we grew up reading, had been so beautifully frozen on stone, a thousand years ago, in a country far away from India.

Japanese and Korean guides explain the Mahabharatha in rapid bursts, to their tour groups, who nod their head in understanding. I catch a familiar word here and there.  It feels good. That feeling of timelessness envelopes me over and over again.

The afternoon is spent at the Ta Prohm Temple.  As we walk around, we see the long tentacle-like roots of the silk-cotton, and strangler-fig trees.  The roots have taken over the temple.  In some places, the roots look like they are embracing the temple, while in some others they look like they are taking back the temple into their womb, to hand them over to Mother Earth.

Our guide points out to a small ‘apsara’ (celestial damsel of great beauty), who is almost hidden by the roots of a tree. She peeps through the roots, smiling at humanity, as she will very soon be engulfed by this tree.  One last smile, till time takes over another bit of history. 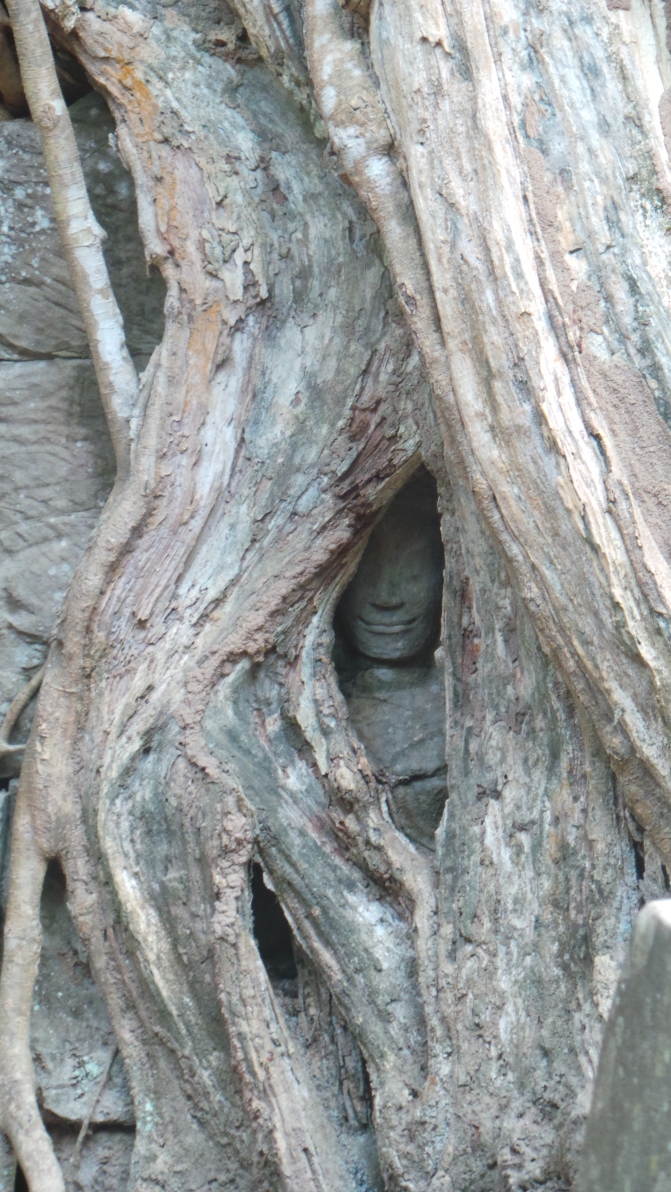