The coconut trees surrounding the Nair Tharavad in the village of Poovakulam swayed in the gentle
afternoon breeze. The sun’s ferocity was trapped by the netted fronds, allowing only the requisite
amount of light and heat to fall on the sprawling, ancestral home below. The occasional caws of lazy
crows could be heard. Further away from the main homestead, water gently rippled and shimmered
in the Tharavad’s huge pond; where dried twigs and leaves floated lazily on the surface, as they
enjoyed their afternoon siesta. 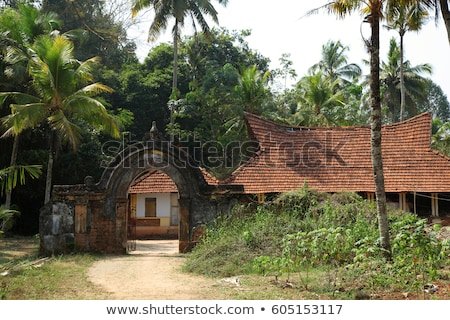 On this day, however, the usual afternoon calm of the Tharavad was broken. The place was bustling
with activity. Two cars had arrived from the city; with the sons and daughters of the family, who had
come with their own spouses and children to celebrate the annual family reunion during the summer
holidays.

There were six grandchildren in all, ranging from the ages of one to thirteen; their feet scampering
around the yard, and their voices echoing across the Tharavad. Their parents, who had grown up in
this beautiful environ, stopped to soak-in the feeling of being home after a whole year of sweating it
out in the mad cities. This annual reunion was the highpoint of each of their summer vacations.
None of the family members lived in the Tharavad anymore. Unni, the caretaker, and his wife, Omana
jointly took care of the property. Their family had worked in the Tharavad and its fields for
generations.

The children continued to explore the Tharavad and its beautiful gardens and groves. They ran hither
and thither, getting acclimatized to this bit of paradise that they visited every year. Soon, the pond
would echo with the laughter of these children, as they spent hours splashing about in its cool waters;
the youngest ones getting their first swimming lessons from the local coconut picker, who would string
the fibrous part of many coconut shells together to create environment-friendly floats that would help
the novices learn.

Soon, the whole family sat cross-legged on the floor to eat a sumptuous sadya, served on huge
plantain leaves from the estate. The leaves soon filled up with mounds of boiled rice, sambar, rasam,
avial, pappadam, an assortment of vegetables – raw banana, yam and potatoes. There was pachidi
made of ginger and tamarind, fresh buttermilk and lots of pickle; not to forget the crisp banana chips
fried in fresh coconut oil. As the family tucked into the wonderful meal, lovingly prepared by Omana,
there were contented sighs and silences, interspersed with laughter and a lot of catching up.

After lunch, the adults moved to the nadu muttam, an open-to-sky courtyard, that served as the
midpoint of the Tharavad. All rooms in the house opened out into this courtyard. The children were
back amongst the coconut trees and mango trees, the older ones trying to climb the mango trees to
get their hands on the raw, green mangoes that dangled enticingly.

Later that week, the family received a visit from the committee members of the local village council,
who invited the family to the theatre to watch a movie on Sunday, and thereafter stay for a celebration
to commemorate the golden jubilee of the theatre.
And that’s when the children heard the story of their grandparents, and especially their grandmother,
who had been instrumental in the theatre’s establishment.

Many, many years ago

The village council had come to meet with Mrs & Mr. Nair. The council members were seated in the
cool confines of the huge living room, flanked by teak pillars and squeaky-clean wooden floors.
The men had come with a proposal. Soon, the matriarch, Shreedevi Nair, walked in with her husband, Venugopalan Nair. She was petite, but had such a strong presence that the seated men stood up
unconsciously. She waved for them to sit and peered atthem through narrowed eyes. She knew the
lot of them from their childhood and asked after their families and parents.

Finally, the President of the Council put forth their proposal. The village was growing, and the farmers
worked hard throughout the week. By way of entertainment, the Council wanted to build a cinema theatre that would screen movies to the villagers. The problem was with both money and space.

The council members sought the Nairs’ help with their proposal. Shreedevi Nair thought about it for some time. She had herself seen only one movie in a cinema theatre many years ago, when she had accompanied her husband to Mumbai on a work trip. It would help
people unwind and relax after a long, tiring day working under the blistering sun.

The Nairs conferred for a while, and generously donated a tract of land that lay at the edge of the
huge Tharavad estate for the Cinema Theatre to be constructed. The couple also donated money to
get the project off the ground.

The theatre took nearly a year and a half to build, and with the theatre to be inaugurated soon, the
excitement in and around Poovakulam was palpable.

Shreedevi & Venugopalan Nair were the Chief Guests, who inaugurated the Theatre; and watched the
screening of the first Malayalam movie in the theatre with all the people in the village. To express their gratitude for the Nairs’ generosity, the Theatre Owners Association gave them a letter of appreciation, and free-tickets to any show, on any day, for all members of the Nair family, for life.

The Theatre grew from strength to strength, and slowly added a food-stall that sold peanuts, popcorn,
vadas and samosas, along with hot tea and coffee, or cold drinks for those who needed them.

Back in the Tharavad, Shreedevi Nair, fell in love with the silver screen. She looked forward to every
new movie that was screened. Every Thursday evening was ‘movie time’ for the matriarch. And the
whole Tharavad and Theatre Complex geared up for these visits. She would always attend the 6 – 9
p.m. show in the evening, preparations for which would start in the afternoon. After a simple lunch
and her afternoon siesta, Shreedevi Nair would have a nice bath. Earlier in the day, Kuttan, the man
who ironed clothes for a living, and who was also a benefactor of Shreedevi Nair’s generosity, came
to pick up the set mundu and matching blouse. His ‘ironing shop-on-wheels’ was always stationed
under the cool shade of the coconut trees on the Tharavad’s land, from where he served all his
customers. When Kuttan arrived to pick up the set mundu, Shreedevi Nair always told him to iron the
clothes to perfection and deliver them on time.
And never once, in all the years that Shreedevi Nair visited the theatre did Kuttan ever fail her.

Every Thursday, the beautiful set mundu – that was ironed and folded neatly – was delivered at 4 pm sharp.
Kuttan’s arrival coincided with tea time for Shreedevi Nair. She would have a strong cup of chai, seated
on her favourite easy chair; chai that was flavoured with cardamom or ginger. After her cup of chai
Shreedevi Nair would get ready for the movie, set mundu neatly pleated. She would then powder her face and apply chaandu (a red coloured liquid that is used to apply the red dot or bindi on the forehead). The next important item on the list was her chellam or chella petti, which was a box containing betel leaves, betel nuts, lime, and a very aromatic variety of tobacco.

At 5.45 p.m., she would dab on a little perfume, and proceed to the theatre. The Tharavad’s watchman alerted the Theatre office about her arrival. Everybody in the theatre and its vicinity knew Shreedevi Nair, or Shreedevi Amma, as they called her – the tea stall owner, the peanut seller, the ticket collector, and of course the owners. All of them paid their respects to her, as she walked into the theatre. A special seat was reserved for her in the middle of the second last row.
The doorman would not allow anyone to sit on that ‘reserved’ seat on Thursdays.

During intermission, the owner, and later the owner’s kids would come and enquire about the movie and about Shreedevi Amma’s health and her family. They drew a lot of comfort by her presence. In many ways she was their lucky mascot.

Shreedevi Amma watched every single movie that was screened in the theatre, till she died at the age
of seventy-nine. She became one with the characters and the plots; and would bring home her views
about the movie, discuss the movie with family members, hum the songs and curse the villains whohad troubled the movie’s protagonist or ‘hero’.

Sadly, none of her children enjoyed watching movies, much to Shreedevi Amma’s disappointment. However, she never changed her Thursday movie-watching ritual for anyone. With her charismatic presence and generosity, she lit up the lives of the people in the village. The peanut seller, Kuttan – the iron-man, the theatre’s doorman, the chai wallah – all of them remembered her kindness, her generosity and her humility.

The Nair grandchildren walked into the theatre with their parents. The family occupied one whole
row. The current owner of the theatre, who was the grandson of the first owner, guided the family to
their seats.

In the middle of the second-last row, one seat was cordoned off by beautiful satin ribbons. The seat
was made of plush red velvet. On it was affixed a small plaque that read –

“In loving memory of our beloved Shreedevi Amma, a true lover of cinema. Your generosity will forever remain in our hearts.”

Shreedevi Amma’s sons and daughters teared-up as they remembered their mother.