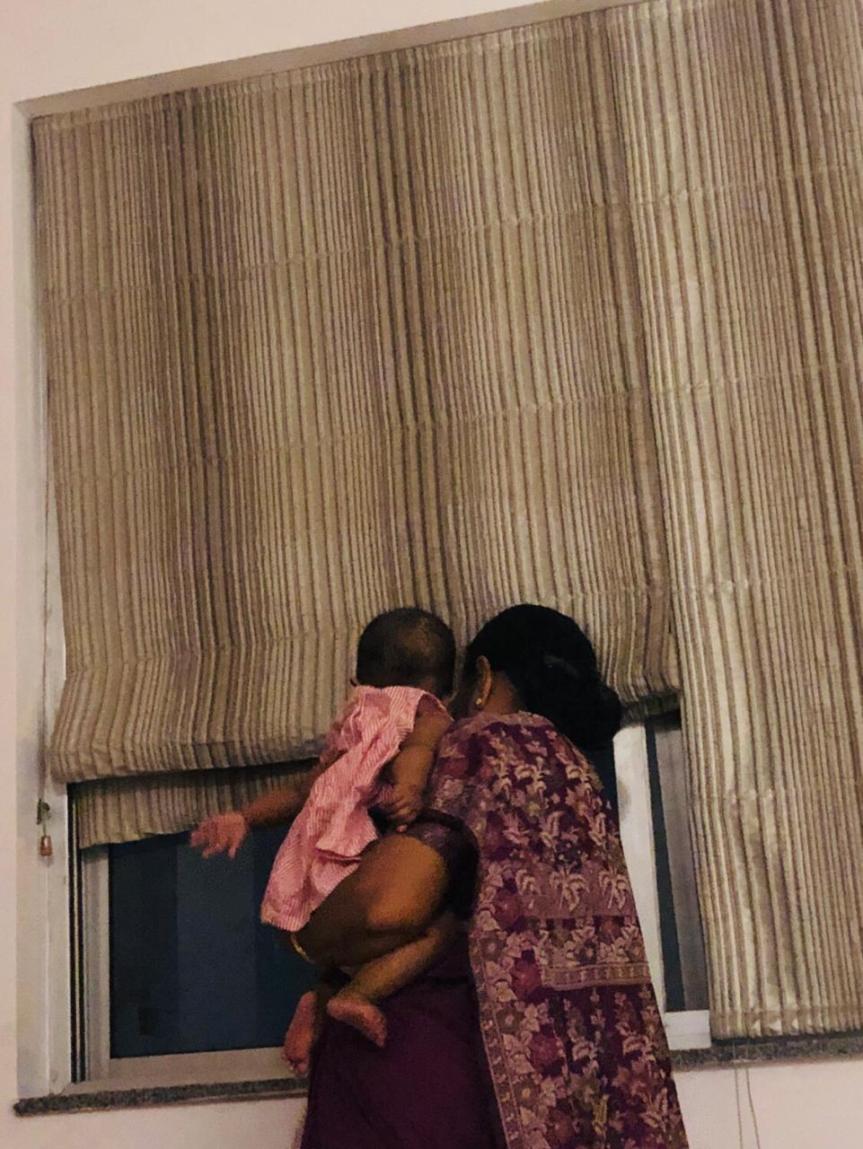 I received this photo on our family group yesterday – a picture of my little niece and her grandmother watching the heavy rain through the window.

A baby and her grandma, who are seven decades apart, and are looking out the window. My niece is watching the rain, transfixed by the play of the street lights on the falling sheets of rain. Her grandmother derives joy from watching her granddaughter, reveling in her widening eyes, her cooing and her babbling at the rain.

One is beginning this journey called life, where rain will mean splashing fun, paper boats, samosas and hot chocolate. For the other, who has seen life, the rain evokes so many memories of the past, of being a child, of being a teen, a married woman, a mother and now a grandmother. She has seen rainy days and ‘rainy days’ in this long journey called life.

Time seems to stand still, only the lashing rain can be heard. Just like everything else in nature, rainfall is part of the changing seasons; this is also true of our lives, change is happening all around us.

Life flies past in the blink of any eye, but then again, life also stops for a brief beautiful moment like this, when time and age become irrelevant, when only pure love exists.

We are in a cab, making our way across the city of Bengaluru in India.

As a mother, I have reached ‘that’ stage, where I am not given a choice to opt for a window seat in any vehicle. I am sandwiched between my kids. It is a pleasant day, and we have rolled down the windows.My husband sits in the front, lost in thought, and I suspect, also trying to catch a few winks.

There is heavy traffic, and our progress is stilted. The kids play a game of word building.

After a while, the congestion eases, and we start moving.

All of a sudden, an autorickshaw pulls up alongside our cab. The auto driver waves wildly at our cab driver, and shouts out a loud greeting.

Our cab driver is pepped-up now. He recognizes an old friend. And for the next hundred meters, the two vehicles drive in perfect synchronization.

A time during which the two men exchange pleasantries and catch-up on each others’ lives. Their grins are infectious, their excitement palpable.

Our cabbie sits up straighter, and looks recharged.

Soon, the time comes for the two friends to part ways. One takes a left, the other takes a right. They say their goodbyes.

This makes me think. We meet many people who travel with us on this journey called life, who share our time, space, emotions and memories.

For reasons unknown, we do not meet most of these people ever again; but sometimes we do bump into someone we know from our past.

Life pauses for a bit for us to rewind and remember, and then moves on, taking us towards new experiences and people.

To an onlooker, the lanky boy and the bearded old man walking towards the train station was not an unusual sight; but in the stoop of the boy’s shoulders and the glimmer of anxiety in the old man’s eyes there were so many stories, deeply burrowed, not ready to be talked about yet.  The lanky boy’s life had turned upside down in the last one month.  The old man had been his only support.

The pair walked towards the platform, where the metal serpent stood, waiting to take this boy to a new life. The boy avoided the old man’s gaze, by looking for his compartment, and scanned the names on the list to check out his name and berth.  There it was Arun.S, age 17 years, Seat 27.

There was nothing more to be said really.  The old man gently scratched his beard, at a loss for words.  Both of them looked relieved when the metallic voice came over the PA system, announcing the imminent departure of the Kovai Express to Chennai.  The old man hugged the boy clumsily and the boy’s throat suddenly caught.  If one watched him closely, one could see fear and uncertainty writ large on his face.  But nobody had time for a lanky 17 year old.  He was just one amongst hundreds on the platform, temporary residents of the railway station, inhabiting it for a short while and moving on to other towns and cities.

With five minutes left to go, Arun boarded the train and settled down in his seat and sat by the window.  The old man peered into the train through Arun’s window.

“Take care of the suitcase and call me if you need anything,” he said to Arun.

Arun nodded and mumbled, “Thank you for everything”.

Before either of them could say anything more, the train lurched and gently glided out of the station.  The old man stood stroking his beard, wondering if he had done the right thing by the boy.

Arun craned his neck to catch his last glimpse of the only person whom he could remotely call family. He involuntarily let out a sigh.

There was a young couple, an old woman, who was already asleep, and two children & their parents sharing the coupe with him.  By 11 pm, all of them had drifted off to sleep and the lights had been switched off.

Arun lay down on his berth, but sleep eluded him.  His eyes gazed at the ceiling fans that were spinning with a heavy whooshing sound.  What would become of him, he wondered.  His anxiety was palpable as he tossed and turned.  Suddenly his body would go rigid, as he resolved with every ounce of his willpower that he would make it, come what may.  Then his body would suddenly go lax, as the last of his energy drained away from him, as his mind and resolve weakened again.

His mind spun back to that day, when his life had turned upside down.  He relived it….

He walked back from school. It was another cold monsoon day in the small town of Ooty. The clouds hung dark and heavy and he knew that the skies were about to open up any moment now. As he reached the small hillock atop which was his house, the rain drops started falling in rapid succession.  Holding up his school bag above his head, he ran up the slope, his shoes sliding on the brown mud and the flowing water.

When he finally made it home, he was surprised to see that the door was locked.  He quickly let himself in with his key and changed into dry clothes.  He decided to make a cup of tea for himself and his mother, who had probably been delayed by customers or stuck in the rain.

He went to wash himself in the basin that was in the backyard of the house, where there was no roof but a corrugated metal sheet to protect them from the rain, when they had to use their bathrooms or wash area.  Here, he could hear the metal thump-thump of the rain drops as they fell on the sheet and rolled down to join other water drops down the hillock.

Just as he placed the saucepan on the hob to boil the water for tea, there was a loud banging on the door.

“Must be mom,” he said to himself and went to open the door.  Mr.Raman, his neighbour stood at the door with a huge black umbrella that blocked out all the light.

“Arun, I have some terrible news for you.  Your mom has been in an accident on Commercial Street and was rushed to hospital, but the doctors could not save her.  I am sorry, so sorry,” said Mr.Raman.

He hugged the boy and patted him and said, “Come with me, we have to go to the hospital.”

Arun stood dazed, the sounds of the raindrops seemed to magnify and overtake his brain. He could not think, nor understand or process what he had just heard.

He had only had his mother, nobody else, save for a few friends like the old man. He spent a restless night, waiting for the train to draw into the station and to get started with his new life.  By 6 a.m., he was washed and ready, his suitcase ready to be taken out.

He checked the slip of paper with the address written on it, he knew it by heart by now, but the act of reading it again, gave him something to do.

He smiled wryly to himself. This moment was where life had brought him to;  17  long years compacted into his physical frame, mental agony and this one suitcase.

We are on the Mumbai-Pune highway. There is a nip in the air when we leave our hotel, but as we leave the outskirts of the city and hit the highway, the sun is bright and blinding.

Traffic is not too heavy at this early hour. The droning of the car on the highway lulls us into a semi-sleep, where one is in a state of hazy awareness.  Trucks whiz past carrying perishables, petrol, and all kinds of goods that people seem to require. The Radio jockey’s voice on the FM talks to us, modulating, sharing jokes and presenting the next song.

Once the sleep cycle is broken, I watch the lush greenery and the mountains. All trucks have a painted notice on their rear which say, ‘Horn OK Please’.

By the time I wonder what this means, we stop at a gas station in Lonavala, a hill station on the Western Ghats. The gas station also has an assortment of stalls, and vendors, selling street food.  Lonavala is famous for its ‘chikkis‘ (peanut candies), and we buy a few to take back home with us.

As we walk around to stretch our legs, my eyes catch a stall selling ‘Dabelis‘.  My mouth waters, as I eye them. My stomach is  full from the heavy breakfast I have already wolfed down.  However, my brain is ready to make more space to accommodate a ‘Dabeli‘. I mean, how could it not.

For those of you who don’t know, a Dabeli is a very popular snack food/street food from India. ‘Dabeli’ literally means pressed.  A patty made of boiled potato to which a special ‘Dabeli’ masala is added is topped off with pomegranate seeds, roasted peanuts, chopped onions and coriander leaves. This patty is placed inside a toasted burger bun. The burger is topped with ‘sev’ (a noodle-like fried snack made from gram flour) 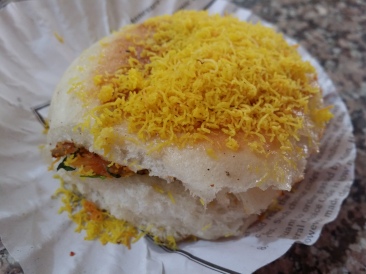 I sink my teeth into this perfectly made ‘Dabeli‘.  My taste buds enjoy its sweet-sour taste, and the ‘crunchiness’ as I bite into the pomegranate seeds and sev.  This is absolute joy.  I eat the ‘Dabeli‘ and watch other travelers, who have also stopped by at this gas station, to buy water, to stretch their legs, to eat snacks.  I wonder if I will ever see these people again, I wonder who ordained that we would all meet here, at this gas station, on this particular day.

As I watch, some of them get into their coaches and cars, to drive away to faraway places, probably to meet other people, or to end this journey. Maybe even to begin new ones.

I wash down the ‘Dabeli‘ with a perfect ‘masala chai’ and walk back slowly to the car…as the highway beckons.